Albania may be a little country but there is a lot to see and do in this exciting up-and-coming location. While Albania is slowly becoming more popular with tourists it remains extremely undiscovered, as well as almost completely unspoiled. Albania boasts some of the best examples of Ottoman architecture in the world, along with supremely clear Mediterranean air and stunningly fabulous beaches. 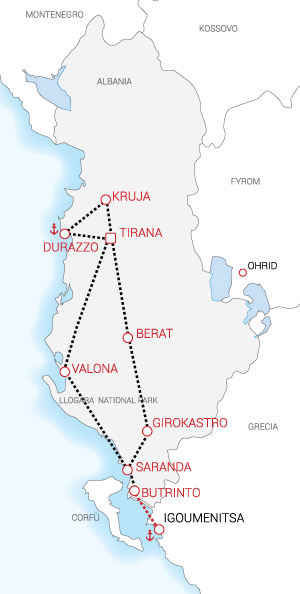 Top 10 places to visit in Albania!

1.The Albanian Riviera is perhaps the most popular place in the country for tourists to visit. The riviera has a growing reputation as an important music location, with many international music festivals – including Turtle Fest and Soundwave Albania – having taken place here. Nightclubs such as Folie Marine in Jale beach and Havana Beach Club near Dhermi draw young people from across Europe to the Albanian Riviera. The seaside town of Himara is one of the riviera’s best places to visit, while Porto Palermo Beach, Llamani Beach and Filikuri Beach are some of the area’s finest sandy stretches, while Drymades Beach is one of the liveliest spots here.

2.The capital city of Albania, Tirana will be the starting point for many people exploring the best places in Albania.The city is home to few must-see tourist locations, but the 18th-century Et’hem Bey mosque is well worth a visit. Tirana’s people, like the vast majority of Albanian locals, are exceptionally friendly and the city is supremely affordable, with surprisingly excellent food and drinks both very cheap. Skanderbeg Square is one of Tirana’s most important places and this is where the National Historical Museum can be found too. At the heart of Skanderbeg Square – and therefore the heart of Tirana – is a statue of the historic Albanian national hero Skanderbeg.

3.The Llogara Pass is one of Albania’s most famous places, with the road providing one of the most spectacular drives in the whole world. Located in the middle of the Llogara National Park, the road travels to over 1,000 metres above sea level and the scenery will take your breath away. At the top of the pass there is a good range of restaurants, which are ideal places to enjoy some of the most stunning sights in Albania. Llogara National Park itself is home to animals such as the golden eagle, European wildcat and fallow deer. A drive from Tirana to Saranda taking in the Llogara Pass should take a few hours, but allow plenty of extra time to stop and take lots of photographs.

4.Berat is in the middle of Albania and it is believed to be one of the country’s oldest towns. Berat is often known by its nickname – the City of a Thousand Windows – due to its mix of Ottoman and Albanian architecture. Berat’s main tourist site is the 140th century castle, Kalaja, which is still home to hundreds of people. Formerly among the most important Albanian cities of the Ottoman Empire, Berat was added to the list of Unesco World Heritage sites in 2008. The Church of St. Mary of Blachernae is a must-see sight for anyone visiting Berat, as is the Mangalem Quarter.

5.Saranda is one of the hottest tourism locations in Albania, with the town having undergone a huge amount of development in the last 20 years or so. Saranda is home to some of the most unforgettable beaches in Albania, while the Unesco World Heritage site at Butrint is located just outside of Saranda and is well worth a visit too. Lekursi Castle is one of the best places to go in Saranda, with people flocking here to enjoy stunning sunsets. Saranda is located a short trip across the Ionian Sea from the popular Greek island of Corfu.

6.A Unesco city, Gjirokastra is without a doubt one of the best places to visit in Albania. Unique Ottoman period architecture – with houses designed like small castles – can be found all over Gjirokastra, which has a military museum and art gallery in its amazing castle that dominates the skyline. A folklore festival also takes place in Gjirokastra’s castle every five years – the last one was in 2015. Visiting the old Ottoman bazaar in Gjirokastra should be on the agenda for anyone visiting this part of the country. Gjirokastra is famous as the birthplace of world-renowned author Ismail Kadare and Albania’s former dictator Enver Hoxha – today their old homes are museums.

7.Located a short trip away from the capital Tirana, Kruja is a must-visit spot for anyone heading to Albania for the first time. Kruja is home to the national ethnographic museum, but it is best known for being where the Skanderbeg museum can be found. Located in the Kruja castle, the museum is one of Albania’s most important and popular tourist attractions. It was from this fortress that Albania’s hero – George Kastrioti Skanderbeg – defended the country from Ottoman invasion over a period spanning three decades. The castle also offers staggering views of the Adriatic Sea. The national park Qafe Shtama and the tomb of Sari Saltik are also located close to Kruja.

8.Away from Albania’s biggest cities, in the north of the country, is Theth. Located high in the Albanian Alps, Theth is a designated area of outstanding natural beauty and it is easy to see why. Theth National Park is perhaps the most beautiful place in all of Albania, with its Grunas Waterfall and the Lock-in Tower both extremely popular with visitors. The mountain peaks of Thethi, Boga, Razma and Vermoshi provide an unforgettable experience of Albania in its most natural state. Hikers and nature lovers will find Theth to be one of the best places to visit during a trip to Albania.

9.The highlight of the Albanian Riviera is perhaps the Ksamil Islands, a remote group of three small islands located just off the coast, accessible only by boat from the small town of Ksamil. Part of the larger Butrint National Park, the Ksamil Islands are a fantastic example of Albania at its most untouched and unspoiled. Visiting the Blue Eye Spring is also a must for anyone who wants to experience what Ksamil has to offer during their magical Albanian break. July and August are the busiest time of year for the Ksamil Islands, but even then there are few tourists around here.

10.The largest town in the north of Albania, Shkodra is often considered the cultural capital of the country. This is because it hosts events such as Carnival, Lake Day, the Children’s Festival and Shkodra Jazz Fest, while it is also home to a famous historic castle notable for its important role during the First Balkan War. Shkodra has a simply gorgeous lake, while the medieval citadel of Drisht is only a few miles away. The famous Migjeni theatre is in Shkodra as well, along with an ace market that is well worth visiting. Shkodra’s Malazeze cuisine is perhaps Albania’s best too.

Tour of Albania for groups

Unfortunately there are no car rental offers at this location at the moment.