Celebration of Easter in Corfu is a unique experience, different from anywhere else in Greece and particularly more impressive for first-time visitors to the island.A huge festival, in which various components come together harmoniously, the Orthodox Christian faith, pagan traditions, the powerful presence of Saint Spiridon, the Roman Catholic community, the Venetian influence, genuine Corfiot humour, the music of the philharmonic bands and of course the spring atmosphere.

Palm Sunday is the day when the deliverance of Corfu from the plague in 1630, thanks to the intervention of Saint Spyridon, is celebrated. The Body of the Saint is taken in procession around the streets of the town, accompanied by all the island’s philharmonic orchestras. The procession sets off from the Saint’s Church at 11 in the morning and follows the line of the old town walls, from where the Saint drove off the plague. People from all over the island pour into town, lending a festive feel to the day. At midday, in homes and Tavernas, the traditional dish of the day is served – stockfish or salt cod.

Holy Week throughout Greece is characterised by its church services, by fasting, and by the anticipation of the Resurrection. We recommend that during Holy Week you leave the town and venture out to the villages. Wander in the countryside, that is moving into spring and the season of fertility and renewal, and enjoy its perfumes. Visit villages with Venetian houses, with pristine courtyards full of blooming potted plants. Discover little Tavernas which have set their tables out in the sun, to sample the tasty Lenten food and the local wine which is at its best. And as soon as the sun has set, head for the local cafe, where you can try Greek coffee or a sweet liqueur in the company of the locals.
If it is Holy Tuesday, you will hear the Hymn of Kassianis, if it is Holy Thursday then the service of the Twelve Gospels is taking place in the monasteries. If you decide to stay in town, bear in mind that the Church of Agios Ioannis (John the Baptist) in the ‘Square of the Saint’ celebrates with Byzantine hymns, while the Monastery of Agia Eufemia beside Mon Repos has the finest tradition of services, together with the Platytera Monastery at Mandouki, Agii Theodori in Garitsa, and of course the Cathedral. The most singular feature of Easter in Corfu is the moving choral church music which overflows from the places of worship and spills into the alleyways of the town, on to the rooftops of the villages, out into the courtyards of the monasteries. This harmonious chanting, basically a form of four-voice choir, came from Crete during the 17th century, and is known as ‘Cretan music’.

On Holy Wednesday the Municipal Choir gives a concert of ecclesiastical music at the Municipal Theatre. This tradition was established in 1989 with the aim of approaching the Holy Drama through the music of both the Eastern and the Western Church.

A nice idea for Holy Thursday might be to attend the Service of the Twelve Gospels at the Duomo, the Catholic Cathedral in the Town Hall Square, where they light twelve candles and extinguish them one by one as the reading of each gospel is completed. One custom which today has disappeared is that of Holy Thursday, which was preserved by women in the countryside until recently. The women would attend the church service, and while the priest was chanting the ritual of the Twelve Apostles, they would knit a piece of thread with their fingers. They would place the little charm thus made around the wrist of a baby to ensure that God would protect it.

Good Friday is the day of the Epitaphist, the funeral of Christ. All over the island, as all over Greece, every church brings out its own funeral bier and parades it around the parish. In Corfu however, the attendant philharmonic orchestras and choirs, the presence of thousands of Corfiots as well as foreign visitors, give another dimension to the gravity of the occasion.
It is worth noting that the Old Philharmonic Orchestra (in red uniform) play Albinoni’s ‘Adagio‘, the Mantzaros Orchestra (in blue) Verdi’s ‘Marcia Funebre‘, and the Kapodistrias Orchestra the ‘Elegia Funebre‘, Mariana’s ‘Sventura‘ and Chopin’s ‘Funeral March‘. The town processions start in the afternoon to give the orchestras time to escort them all. As the hours pass, the processions become thicker on the ground, until they all converge on each other and people don’t know which way to look first.
The first epitaphist leaves the Church of the Blessed Virgin of Spiliotissa in the New Fortress and the Church of Pantokrator in Kampielo at two in the afternoon, and other churches follow, until ten in the evening sees the exit of the Epitaphist from the Orthodox Cathedral.

FIRST RESURRECTION AND THE ‘POT THROWING’ On Holy Saturday, at 6 a.m. in the morning, the custom of ‘the earthquake‘ is carried out at the Church of the Blessed Virgin of Strangers. This is a re-enactment of the earthquake which took place after the Resurrection, as described in the Bible. Later, at 9 am, the procession of Saint Spiridon, which was consecrated in 1550 when the Saint saved the island from famine, takes place. The Saint shares the stage with the Epitaphist of his own church, a custom which was established during Venetian times when, for reasons of security, epitaphist processions were forbidden, whereas the procession of the Saint was permitted to take place. The accompanying orchestras play Michelli’s ‘Calde Lacrime‘, Faccio’s‘Hamlet‘ and Beethoven’s Funeral March.

At 11 a.m. the First Resurrection and the ‘Pot Throwing’ custom take place, and the local people throw pots out of their windows, smashing them onto the streets below. This noisy custom, originating with the Venetians, began in the town and spread to the villages. The Venetians used to throw all their old and useless objects out of the window on January 1st each year, so that the New Year might bring them new ones. The Corfiots adopted this custom and moved it to their great Easter celebration. Nowadays, instead of throwing out old crockery, the people use big, specially made pots (called a ‘botis‘), filled with water to make a louder crash. Another explanation for the custom gives it a pagan provenance. At Easter, nature starts its new year and re-awakens after winter.
The fruits are collected in new receptacles, throwing out the old ones. After the breaking of the pots, the philharmonic orchestras tour the streets playing joyful songs. At ‘Pinia’, the old commercial centre of the town, the custom of the ‘mastelas‘ (washtub) has been revived. A half-barrel decorated with myrtle and ribbon is filled with water, and passers-by are invited to throw coins into it for good luck. When the first bell sounds for the Resurrection, someone jumps into the barrel and collects up the money. In old times the diver was not a volunteer but an unsuspecting passer-by, thrown in against his will. In the villages in general, after the First Resurrection, the Easter lambs are slaughtered and their blood is used to paint a cross on the door lintels.

On Holy Saturday evening, before the Orthodox ceremony takes place, you may attend the Catholic service at the Duomo Cathedral. With the participation of all Church officials, the Resurrection service finishes here at 23.00, to permit the clergy time to prepare themselves for the Orthodox service. All over Greece the ceremony takes place on a platform outside the church. In some Corfiot villages , indeed, it is the custom to close the doors of the church, and with the cry of “Christ is Risen’ (Christos Anesti) the priest, having made three circuits of the church while chanting, kicks open the central door and enters, singing the psalm ‘Enter,enter by the Grace of God’. In Corfu Town, the service is held in the Upper Esplanade Square, starting at the Church of Agia Paraskevi, with the participation of the Bishop, the philharmonic orchestras, and thousands of people. The Resurrection is seen in with a roll of drums and an impressive firework display, and when this ends the bands traverse the streets of the town at a great pace playing cheerful music, with people running behind them singing. The party has only just begun, and will last until dawn. The Resurrection is celebrated and the Lenten fast is broken with magiritsa (the local Easter soup), red eggs, fogatsa (brioche), columbines (a special bread of Venetian origin, baked in the form of a dove and of course lots of wine.

At 7 a.m. on Easter Sunday morning, churches in town which possess an icon of the Resurrection parade it around the central streets, something which is well worth seeing. The parades finish at around 10 a.m. but the great Easter Celebration is far from over. If you were up all night, then now is the time to snatch a little sleep, or if not, what would you say to a trip into the countryside? Alternatively, the town offers an Easter lunch party at the New Fortress Naval Base at 11.30 a.m. and a parade of the Resurrection icon from the Church of Agia Triada (Holy Trinity) in Garitsa at 6.30 p.m. In Corfu, unlike the rest of Greece, the spit-roasted lamb is a recent introduction as a custom, and is not traditionally part of the Easter menu. Here they eat egg and lemon soup (avgolemono) at lunchtime, made with 2 or 3 different kinds of meat, and they leave their easter lamb at the end. They crack red-dyed eggs one against the other and stick the shell on doors or throw it into the garden to bless the harvest.

The week following Easter is called ‘nea‘, meaning ‘new’, and the days are called accordingly ‘New Monday’, ‘New Tuesday’, etc. It is a very holy time and many events take place. On Easter Monday processions take place throughout the island. Early in the morning, after the services, each church brings out its standard and its Cross. The standard is especially tall and heavy, and is carried by the strongest young man, who regards the duty as a great honour. 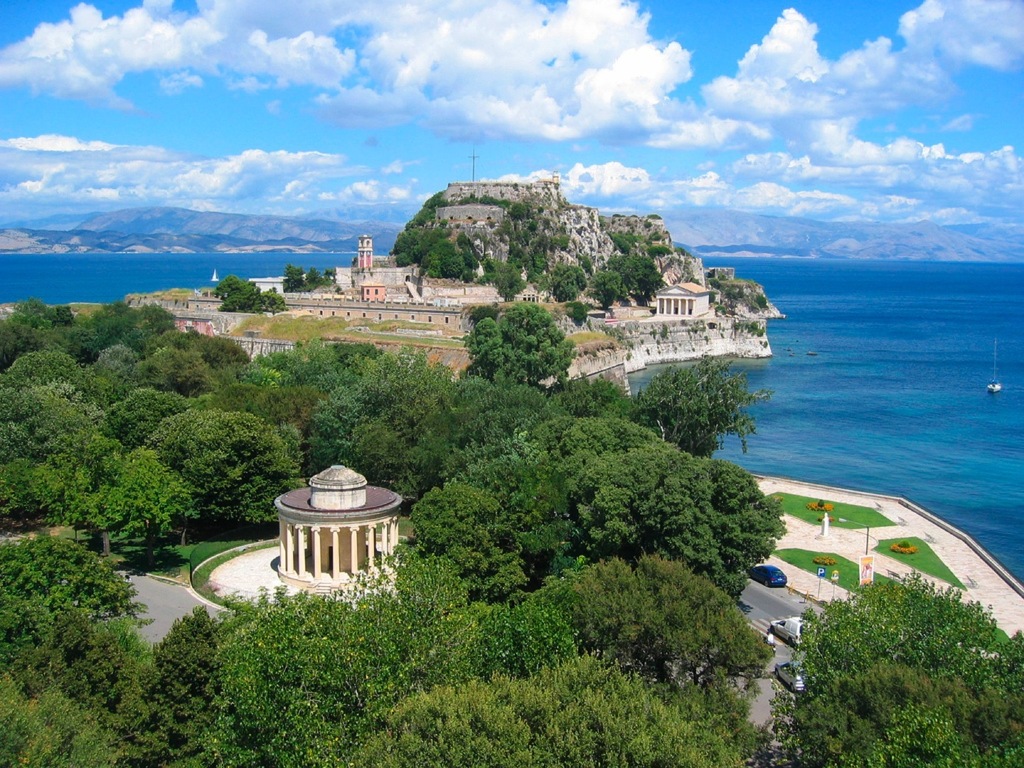 Corfu Highlights Paleokastritsa: is situated about 25 kilometres from town, linked to it by one of the widest and best laid-out roads on the island. Consisting of two impressive headlands and six coves, the area’s unique combination of lush vegetation, precipitous cliffs and sandy beaches has established it as a top-class resort. The northern promontory Read more
x
x